Almost $180 for Core i3 is not so budget friendly, unfortunately.

Since 2011 when Sandy Bridge was introduced, Core i3 is practically no longer overclockable. Only those who were chosen to be unlocked can be overclocked but they were only Core i5 and Core i7 CPUs. Pentium got some love in 2014 when Intel introduced Pentium G3258 which is unlocked and can be overclocked. However, even when overclocked, Pentium G3258 still no match even against Core i3 when used on gaming. This is due to the fact that Pentium only has two cores and two threads.

Now, with Kaby Lake, Intel will create one unlocked Core i3 SKU, branded as Core i3-7350K. The CPU is clocked at 4 GHz with 4.2 GHz Turbo. Wow wait? Did I Just say Turbo? Since when Core i3 has Turbo Boost? Isn’t Turbo only for Core i5 and i7? Did Intel has lost their mind? I don’t know. The price however… it’s approximately $177. Intel is asking you $177 for an unlocked Dual Core CPU. This is not right. This is not a budget friendly processor even though it is overclockable. Just because it is unlocked doesn’t mean it’s worth this much. Not to mention that you also need expensive motherboard to overclock this CPU. So yeah, Intel has not lost their mind. 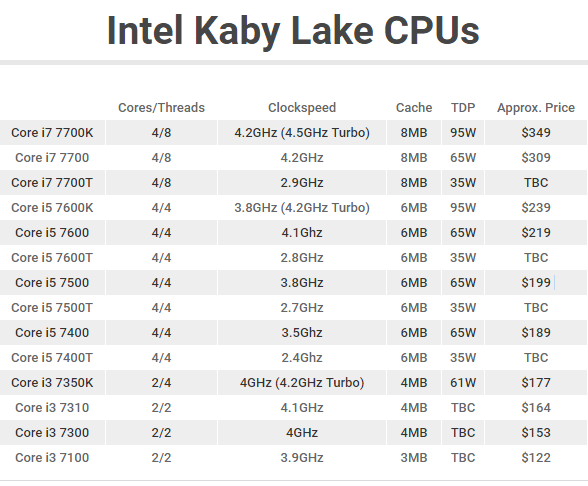 This Intel Kaby Lake is taken from PCGamesN. By spending a few bucks more, you can buy Core i5 7400 which has more cores and no need expensive motherboards to maximize it’s capability. You’ll see that Core i3 7100, 7300, and 7310 only has 2 threads so there must be some mistakes here.

Let’s hope AMD Zen will come to save the day. There are words about Zen SR3, SR5, and SR7 but that is clearly still rumors. Unless you really need a new computer, just hold yourself and save some money until newer platforms from both Intel and AMD arrive to the market next year.