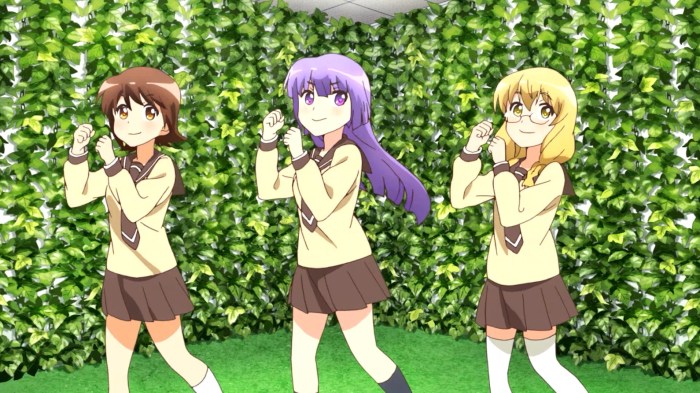 Sansha Sanyou us a 2016 anime about the friendship of high school girls. The concept is very common these days so there is nothing than can lead me to super excitement. There are three high school girls as the main characters. Each of them has different personality. We also got some supporting characters which almost all of them are also girls. Pretty common these days, eh? But that’s not the exact story. The manga of Sansha Sanyou was published on February 2003. That’s 13 years ago! So, while the anime is new, the story isn’t.

There is a reason why I decided to watch Sansha Sanyou and that is because of Imamura Ayaka. A newbie seiyuu who also works as radio personality on her own radio program, Imamura Ayaka STAY GOLD. I have listened to her radio program a few times. She is a shinjin seiyuu that I already know outside of anime. Her voice outside of anime is very attractive to my ears. So I wanna know how she do her voice acting, especially as main character. Other than her, the other two seiyuu who voiced the main characters are Wakui Yuu and Kanazawa Mai. Both are also newbie seiyuu. Even on the supporting character side is also filled with newbie seiyuu(s). Nishi Asuka is perhaps the only not so newbie seiyuu in the show while Akabane Kenji is the only male seiyuu and also the only one who is not a newbie.

Oh yeah, I watched the FUNimation version. Comparing both English and Japanese dub, I can clearly hear that Japanese dub is superior. One main reason, the story is about Japanese high school girls with cute looking characters. This type of story is not quite fit for English dub. English dub can perform on par or even superior when the anime is not about Japanese daily life and if the chara design were not design to be so cute. English voice actors can’t bring the cuteness out of the characters. It is just not quite fit according to my ears. However, on action-themed anime, English dub tend to perform on par or sometimes better than Japanese dub. But we’re not talking about action-themed anime here. 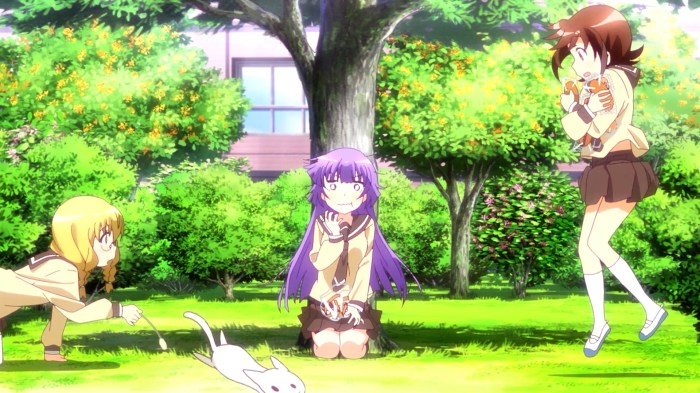 Back to Sansha Sanyou. What is this anime actually about? Three high school girls named Nishikawa Youko (voiced by Wakui Yuu), Odagiri Futaba (voiced by Kanazawa Mai), and Hayama Teru (voiced by Imamura Ayaka) met during lunch time. The three of them prefer to eat their lunch outside of classroom. Nishikawa Youko is a daughter of a formerly rich man but now has become poor. So poor that she mostly only had bread crust for her lunch. Odagiri Futaba is a girl who loves to eat. She eats like a monster and able finish many eating challenge. Due to her loves of food, she can cook real nice too. Hayama Teru is a cat loving girl. At least that would be your first impression. She has a sharp tongue that make others can’t stand her when having a debate with her, especially her rival, Nishiyama Serina. 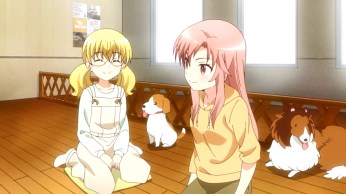 On the voice acting side, I think this anime is very good even with most of the casts are still newbie. The newbie seiyuu(s) are doing great job! On the three main casts, they all leave different impression due but all of them are equally good. My favorite of all is Nishi Asuka. Acchan did a great job voicing Hayama Kou as a gentle big sister. I think voice acting is the best part of this anime.

When it comes to the music. It fits nicely but there is no part where this anime feels super excited. The opening theme is Clover♣Kakumation (クローバー♣かくめーしょん) by Triple♣Feeling and the ending theme is Guchouki Parade (ぐちょーきパレード) also performed by Triple♣Feeling. Triple♣Feeling is the unit consists of Wakui Yuu, Kanazawa Mai, and Imamura Ayaka. It’s pretty common for the seiyuu to sing the theme song of anime these days.

Final Thoughts
It’s a fun and entertaining anime but has nothing special to make this anime stands out. The animation doesn’t resemble a 2016 anime. It’s good  but not enough to be called very good. Again, A Channel from five years ago still looks better than Sansha Sanyou. I like the opening and ending theme. They are very good. The BGM however, while it is good, it is not good but not enough to be called very good. The characters are interesting but somehow also too comical. Voice acting is clearly the best part. All seiyuu(s) are doing great job in voicing their own characters. It’s a decent anime. Watching this is entertaining but there are more anime with similar plot out there.